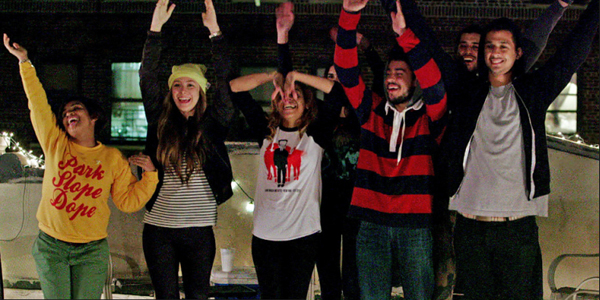 Previously, on Washington Heights, we got to see Audubon get to a show late, go to a show in Queens where nothing worked, drop the ball on getting requested videos and music to a guy who could make things happen, and do well at a local college that they tried to act was not a local college. Chompioso made moves to play baseball on a college level, while breaking Eliza’s heart. Frankie & Ludwin had The Talk that lead to a confusing label of their maybe relationship?

Are they or aren’t they? Either way, they’re buying groceries, and acting like a cute couple. Frankie girl, you made him too comfortable, why buy the cow if he gets the milk for free. Y’know what I’m sayin’? But none of that matters out on JP’s birthday, where he passed on the stripclub party for a paintball field. Talk to me about love when you’re getting hit in the ribcage with one of those paintballs. There are no atheists in foxholes, and there are no lovers when you’ve got a paintball gun in your hand. Taylor warns them to protect their necks. She got all Wu Tang on them. They got Brave Heart on each other. Every man for themselves, even you’re on a team. Fred brings up Ludwin’s conversation with Frankie, and Ludwin said, again, for the 82nd time on this show, that they’re just friends. Fred tells him, again, for the 32nd time on this show, that Frankie wants more.

Barbara, JP’s mom, brings his laundry to his room while they plan a going away party for Jimmy. She’s so sweet, she starts to cry, overwhelmed by her feelings of happiness that he’s finally living a life that’s consistent with his dreams. That’s sweet. What’s not sweet is having mom do your laundry as a grown ass man living in her house. We already know you don’t have a job, you always broke, yeah you’re trying to make it in the industry, but get a job at the Gap or something bro. But ok, nah, that’s cool, you’re not trying to get your hands dirty board folding, but you have your mom washing your dirty drawers? I can’t with you JP. You’re too broke to take homegirl on a date, and your mom sees your skidmarks. No.

Meanwhile, with skidmark free underoos, thanks to mom, Audubon meets up with Danny, to call J. Erving, a record executive who does national tours. While on speakerphone, J. Erving asks them for the same stuff that they dropped the ball on before. Hopefully, Audubon realizes that he can’t trust anyone with his dreams, especially a guy who looks like he doesn’t work out. Not to call people who don’t work out lazy, but what do you do all day?

Casanova, aka Ludwin, aka Rachel from Friends (Ross always knew what he wanted & would never leave Rachel hanging!) and Jimmy are talking about their dreams. Lending more credence to my friend’s belief that the show should have been called Friends with Dreams. We learn about Jimmy’s mother, who also spent time in prison, and how, after her release, has kept her distance from him. Another example of how prison breaks families apart. Rachel tells Jimmy that he has to talk to his mother. Which is interesting since he avoids talking about his feelings.

Rico’s hair is still being stifled, but he looks like he’s lost weight. Apparently Diana found out about Frankie, and Rachel’s non-relationship, and took the beef to social media. Because the best way to handle problems is to take it to Twitter. Said no one ever. Frankie is ready to confront her at Ludwin’s art show. But why? Because that’s another example of how to deal with issues like an adult. Believes no one.

Eliza is helping Rico get dressed for an audition, he brings up Jimmy’s going to Miami, invites her to the party they’re throwing for him. Jimmy goes to see his mother before he goes to Florida. He opens up to her, and tells her that he felt like he lost himself when she, and his father left him. She stayed away because she felt that he didn’t want her around, of course she never spoke to him about it. That would have been mature, and parental-like. Sometimes we forget that parents are just people, and they’re selfish, and self-centered. They have baggage, and issues that they have to deal with, we assume that a parent knows to always put their kids first, which isn’t always the case. Parents can be so fucking selfish. I hope she gets it together, and is sending him clean socks, and underwear while he’s in school. I’ve met men that proudly boast of having owned the same underwear for 10 years, that needs to stop. Mom – send him new pantaloncillos.

“No Twitta, No Problems,” Harry so eloquently puts it when Ludwin Rachel talks about the Dominican Daria-Frankie Drama. JP & Arlene, talk about his dreams. Her dreams are more based in reality, congrats on your promotion girl, and good luck with becoming a trader. I would be friends with someone like her, if Finance People weren’t evil.

Jimmy’s surprise party on the roof came complete with a YMCA-style S-I-M-M-Y. They misspelled it, they tried. Eliza didn’t show up, I wouldn’t either. He totally dissed her at that Nuyorican Poets Cafe, and I’m still mad about it. They toast to Jimmy with either the cups of ice they get at the bodega, or a Finding Nemo, a frozen cocktail, similar to the Nutcracker, but more orange. Ok, they probably weren’t drinking those, but with this never ending Winter, I can’t help but imagine the need for frozen, hood beverages to help cool down the body.

JP is worried about the show, and Barbara is like, calm the fuck down. Pull your [clean] big girl panties on, and put on a good show. J. Irving represents a big opportunity for Audubon. When they get to the show, they’re looking around, nervous that J. Irving isn’t there yet, and he’s not answering the phone. He gets there with his son, so I hope Dominicano Drake Audubon keeps it clean.

Meanwhile, we finally get to see Ludwin’s art, and he’s got a thang for Jesus, or lowercase t’s really turn him on. Dirty Diana is at the show too. Frankie goes and talks shit to Ludwin about it, he doesn’t care, he’s trying to be in the moment, stop acting like a chick Frankie, you’re better than that. Then they flip each other the bird. The bird is the word. Frankie goes to talk to her, and comes off as crazy. I mean, I get the need to want to confront, but as Dirty Diana said, it’s her problem. Who gives a fuck? Say what you want to say about me, Twitter, Facebook to your mother, to my OB/GYN, that talking shit about people is a reflection of you. I’m glad I’m so important that you feel the need to subtweet me. But then again, no one ever subtweets me! I do want that plum lipstick though. I didn’t know that Fred smoked cigarettes. No me gusta! One day we’ll share a cigarette break, and I’ll tell you why you should quit, Fred. 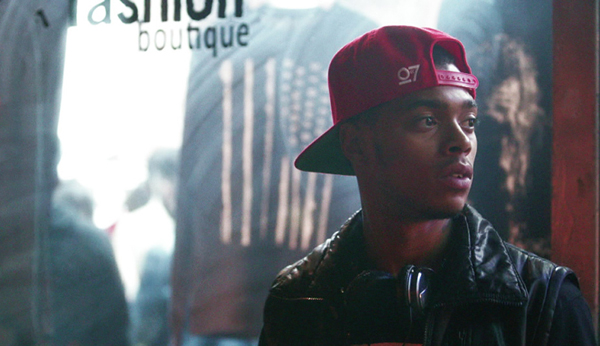 Audubon calls J. Irving to find out about the concert, there you go boy! Finally showing some hustle, calling for yourself. I’m proud of you, and I like those glasses. But of course, he didn’t get any materials from Danny, because he’s the laziest fucking manager I’ve ever met. He’s holding you back homie, it’s time to let go of working with your friend. Don’t mix business with pleasure, wasn’t that one of Biggie’s 10 Crack Commandments? If it’s not, it must have been #11.

Jimmy tells his dad that he’s going to Florida for baseball, and its’ sad but happy. I can’t really talk about this moment too much because it made me feel feelings, something I like to avoid. Jimmy is finally getting his break, and he needs to leave people behind in order to do it, this is why I couldn’t go away to college. I couldn’t leave my mom. Plus, I’m a city girl. I love my Unlimited Metrocard.

In the end, JP and Rico go to say goodbye to Jimmy. Friends with Dreams… UNITE! Then they puffed out their chest, and the different symbols of their dreams shot out of their chests and formed a Lion’s head in the sky. I’m not sure where I was going with that, but I’ll stop where it is now. Eliza goes to see Jimmy off. It was touching, he loves her, but he needs to pursue his dreams. I get that. Besides, Eliza deserves someone who she won’t be afraid to have munch on the sensitive parts, nah mean?!

This episode had it all, action, adventure, we laughed, we cried. We ate chocolate ice cream, and sang Boyz II Men songs. But what will happen next week? Will Audubon finally realize that “manager” of his is wack, and hire me? Will Ludwin’s art offend the Vatican? Does the Vatican get offended without a Pope? Will Fred do that trick with a cigarette and make it come out his ears? Will they finally dance bachata on the roof? Will someone bring me a chocolate milkshake, and recommend a sad book? After that damn Jimmy scene with his father, I have to get out a good cry.

A Toast To Emily B – The Recap