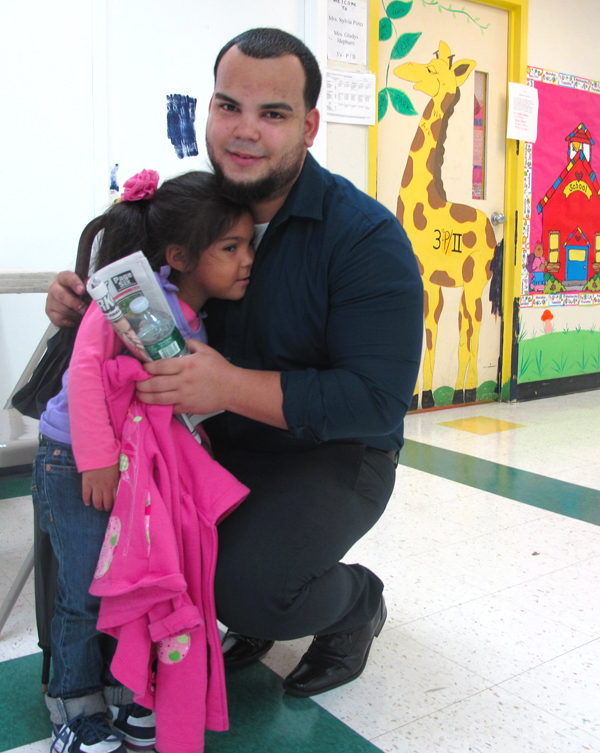 Israel Torres, 27, picks up his 3-year-old daughter, Rachel, at Rena Daycare Center in Washington Heights. Torres and his girlfriend waited one year to get Rachel in this subsidized program. (Photo: Beibei Bao)

Washington Heights – Rachel Torres finally started preschool this September after a one-year wait for a spot in a subsidized center, the only option her family can afford. Her parents, a 27-year-old food delivery man and his girlfriend, applied to the city’s Administration for Children’s Services in 2011, only to discover the waiting list was in the thousands.

The citywide waitlist for all subsidized day care and after-school care, serving children under age 12, has grown to 40,000 children, an estimate by Betty Holcomb, policy director at the Center for Children’s Initiatives, a New York-based organization that refers families to proper care programs. ACS spokeswoman Tia Waddy couldn’t verify the number, saying the waiting list is not centralized and the agency doesn’t track the numbers.

With few exceptions, to qualify for the ACS-funded program, parents must work at least part time or in an approved training or educational program at least 20 hours per week. In addition, the family must make less than 200 percent of the federal poverty threshold. For a family of two – one parent and a child – income must not exceed $37,060, according to ACS.

ACS’s Head Start Annual Report estimated only one third of 63,108 eligible 3- and 4-year-olds in the city received child care subsidies during the school year of 2009-2010, the most recent year for which data is available.

The budget cuts in the past two years only make the situation worse. In March 2011, ACS said that due to the loss of government funding, ACS ended up with a $95 million deficit in its child care budget for the fiscal year of 2012. To offset that, it said it would have to cut approximately 16,500 childcare subsidies, including vouchers and contracted seats, if funding wasn’t restored.

Fortunately, the city government subsequently injected $40 million into ACS’s budget under low-income families and advocates’ pressure, which restored all but 1,500 slots.

In fact, the number of children receiving child care subsidies through ACS has fallen by 19 percent in the last six years due to “rising costs” and “shrinking budgets,” according to a July report by the Institute for Children, Poverty and Homelessness; the demand for such subsidies remains “tremendous,” said ACS in its community needs analysis.

ACS refused to provide the average waiting time, but interviews with four day care providers and advocacy groups find it can range from four weeks to one year, depending on the child’s age, intended enrollment date and program.

The implications of having no access to child care can be huge, because many programs serving 2- or 3-year-olds now involve early literacy and math materials, said Rhonda Carloss-Smith, the associate executive director of Center for Children’s Initiatives, the child care advocacy group. Children who linger on waitlist may not get that intervention.

“They will be behind their peers who are in preschool, in terms of their language skills, school readiness skills and socialization,” said Carloss-Smith.

For children from low-income families, preschool is even more important, she said, because “they may not have books and access to technology at home.”

Carloss-Smith believes more and more parents of 2- or 3-year-olds want not only a safe environment for their children, but also a caregiver “who is knowledgeable about child development and who will prepare their child to succeed later in school.”

“Those kids start behind,” he said. “They don’t have ABCs, and they can’t read or recognize their own name. More importantly, they don’t have the socialization that comes from in-classroom experience.”

Torres agreed. He said Rachel had only family members as her friends before finally being accepted to Rena Day Care Center in Washington Heights this September. He said since Rachel enrolled there, she has made some friends her age and started talking more at home.

A 2005 study found that low-income children who received high-quality early education are one-third more likely to graduate high schools than those who did not, according to HighScope, an education research nonprofit in Michigan.

In addition, low-income children who had quality preschool experiences typically earn 35 percent more than those without, the study said.

THE FIRE NEXT TIME… 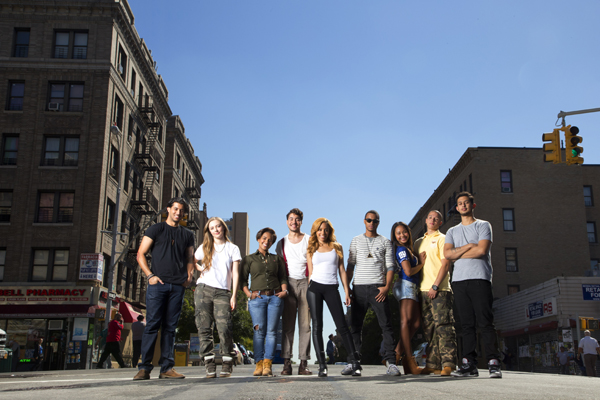