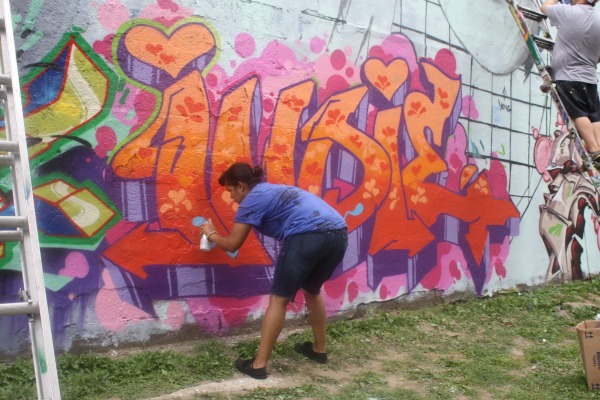 What block are you from?

West 184th Street …btwn Wadsworth and Broadway…not to be confused with the 184 from The Bronx! But I mostly chilled on Wadsworth ave.

Where are you originally from?

I was born in Puerto Rico to Dominican parents but I have been raised in New York since 1981…I was still a baby! When we first arrived in NY we would take the A train all the way from Far Rockaway to 181 street. We always loved the Heights, but it was not until 1993 that we officially moved to 184th street. I have so many memories there my first kiss, my first fight, my first job, the shootouts, the block parties, the blizzard, the blackouts…the good the bad and the ugly!

What do you do for a living?

I am a modern renaissance woman! I am a mother, graphic designer, entrepreneur, graffiti artist and fine artist. I micro-manage my partner Cope2 (cope2.net), basically plenty of consulting, brand management and marketing on a daily basis. I also love to dabble in curating several graffiti group exhibitions a year.

How long have you been doing Graffiti/Art?

I started tagging my name around my neighborhood and other local areas in 2001, but really been doing graffiti pieces since 2004. One of my first throw ups was in the the yard of I.S. 48 on Broadway, it was with one of the early names I toyed around with, done with a hot pink krylon…it was terrible! None of my cousins and friends understood why I wanted to tag up! So later I would meet real graffiti writers who showed me the ropes on how to take it to the next level.

Washington Heights has a deep Graffiti history. Do you remember any writers/artist that caught you’re eye growing up?

Well definitely TAKI183, when I saw Style Wars – the part where they talk about him- I wanted to represent by block! and I loved the fact that the Heights had their own writer’s bench on W.188th Street and Audobon ave…was mystified reading about legends like SNAKE1 and C.A.T.87. But that was way before my time!  The most influential to me was, riding the A train – my favorite train line of them all – I would gaze out the window in the tunnel and look at SMITH SANE, REVS and JA tags. CLEVE was also a favorite with his bold and simple tag style. Riding the transit system in New York City is like a mobile museum it has so much rich graffiti stories to tell.  The Heights is still full of early graffiti gems, it’s amazing that to this day you can still see LIL MAN, BLUE BEARD and KAY161 tags. Also, I remember seeing SEGE throwups and tags – he was in every crack and corner of the heights…as well as kids like MISTA and TECH had it on smash.  With graffiti it’s all about consistency and having an eye-catching moniker to make an impact. These days there are so many toys going over each other no one is standing out.

How has Uptown influenced your fashion and art?

Growing up I was always the black sheep of my family and especially school, so I did my own thing to be different. I dressed in opposition to what was the trend amongst the around the way girls – it was like being a rebel within a rebel. Some people understood my bold fashion sense others not so. My influence was religion mixed with international culture. As you can probably remember I did everything from stenciling the bontanica Jesus imagery on t-shirts, african accessories to punk rocker chick. I guess it was an identity thing, trying to find out who I was, putting all the pieces of the puzzle together. Now that I think of it, it is relevant with who I am and my culture…being Dominican is a fusion of several different races…maybe I was just ahead of myself. With my graffiti art, I put up the 184 in all my pieces…representing the Heights everywhere I go…from Poland to Madrid, East to the West. The Heights is always in my heart! I also put my brothers name “BIG WES” in my pieces and throw ups, to me he represents the local kid who lived life each day to the fullest until their untimely demise.

What is Kweenz Destroy and how long have you been doing it?

Kweenz Destroy is a t-shirt brand that I have birthed, stemming from the famed Bronx graffiti crew Kings Destroy founded by Cope2 in 1982. Since 2000, I have always strived and even experimented to launch my own streetwear brand but could never find a good enough name to fit my personality. So when I met Cope2 in 2004, he put me down with KD and I dabbled with the name that made such a bold sentiment. In 2005, I got a -tag from graffiti king of the No. 1 train line WEST of the Fame City crew and basically just put the logo tag on a t-shirt …at long last my first official printed t-shirt! Last year, I launched the first full collection and did a collaboration with French street art superstar FAFI. Kweenz Destroy is for the all around the world girl who loves to get their hands dirty with some spray paint, she is a one woman army following her own agendas. The brand is a collective the graffiti art of myself and my patrons…a delectable mix of treats you will have just stay tuned for.

Being who you are and knowing what you know…how will you help make Uptown “The Sh*t'”?

Uptown is the shit! But I think it can use some upgrading as far as the arts are concerned. Growing up in the Heights, the arts was always over looked – usually not taken as serious because of the generalization that artists can not make a successful living out of their craft- obviously a total myth. There are many community organizations that ’til this day just do not utilize their funds properly shunning out the arts completely from their agenda. Most of them probably will do just one mural that stays up for years and call it a wrap. The Heights is so rich with innovative kids that have great potential so they need an outlet where they can express their creativity – that’s most important.  Community organizations must focus on having cool arts events that are relevant to the kids these days. Doing things the kids enjoy like art, fashion and music not just talk about unprotected sex. Perhaps having an art gallery showcasing contemporary artists and even local artist, have art classes for all ages. Making a real connection between community and the arts. Local businesses can even support their local graffiti artist and just give permission to paint their wall, because no matter what the kids will eventually just keep destroying it. Lest not be afraid of graffiti art, but let us embrace it! and if you can’t beat them joint them…Kids love that shit!

What is your favorite thing about Uptown?

I love being able to get mangu at anytime. Gotta have the Tres Golpe!..for those that don’t know it’s mashed plantain with sides friend cheese, egg and sausage and can’t forget the sauteed onions…even tho its so high calorie..but who cares you gotta treat yourself once in a while. I also love the Dominican Restaurants, bodegas and salons with more than one of each on the same block- and still stay in business that just amazes me. The Heights sparkles for it’s community environment, conveniently resourceful…where else can you get your hair done, buy jewelery, footwear, buy dvds, wire money, eat a patele and enjoy a nutcracker all in one place!

Currently working on releasing the Spring/Summer lookbook for Kweenz Destroy, going to be super haute! We’ll be collaborating with TILT (graffitilt.com) and Radio Rose (www.aroundthewaygirls.net). This summer, co-curating with fellow artist Queen Andrea (superfreshdesign.com) on an all female exhibit at Crewest Gallery in Los Angeles. Redoing the mural for my little brother Wesley on West 185th street. Launching my own website, some traveling, focusing on my art more and most importantly enjoying the ride with my family. For the young generation the Heights, let’s keep moving forward…break boundaries…there is more to life than chillin’ on the block. The world is really yours…Knowledge is power!

Thanks to the Uptown Collective blog for the love.

For more info on Indie 184 check out Kweenz Destroy 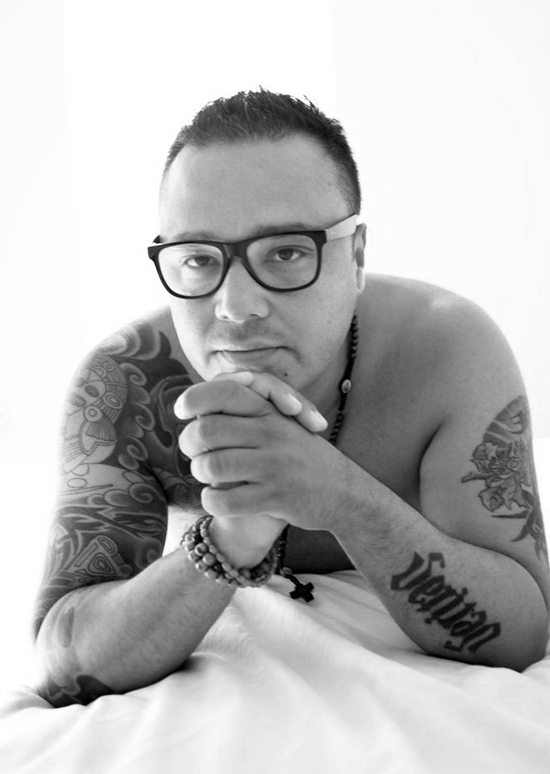