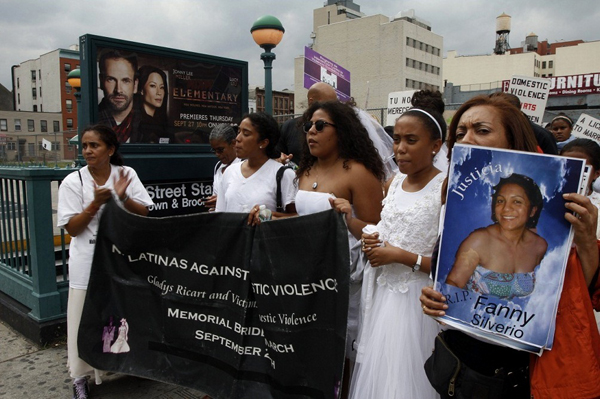 Women donning wedding dresses marched through Washington Heights to the South Bronx and Harlem to speak up against domestic violence. Organizers of the Brides' March said people are increasingly realizing that domestic violence is not a private matter, but a legal matter. (Photo: Beibei Bao)

New York – Jeannette Ocasio had every reason to believe that July 14th, 1986, was the worst day of her life. She received a call from Lincoln Hospital in the Bronx, where her sister Sylvia Ocasio was, brain-dead after a deadly blow to the skull. The perpetrator was Sylvia’s own husband, Samuel Pagan. He would later be tried and convicted of manslaughter in the first degree on Oct. 28th, 1987.

But as Ocasio would soon learn, there would be worse days – days where she would be threatened by her own husband, and then days when her grown daughter would be in the same situation herself.

Two summers after her sister’s death, Ocasio was stabbed by her husband – twice – in the hallway of her Hunts Point apartment. Their 1-year-old daughter was sitting at her feet. For many years after the attack, the little girl, Sylvia, whom Ocasio named after her sister, was scared at the sight of any knife but could not explain why.

The stabbing left a scar on Ocasio’s stomach and a tendency to avoid violent movies, including “The Burning Bed” and “Enough,” since both films feature women in abusive relationships.

Earlier this year, Ocasio’s husband died of kidney failure caused by excessive drinking. She declined to disclose his name, because, as she explained, “I forgave. I have to move on, (otherwise) that anger will eat you inside.”

But her nightmare is nowhere near the end. About two or three years ago, Ocasio saw her now 24-year-old daughter come home with black and blue bruises. Sylvia said she fell down the stairs, but Ocasio did not believe her. She found her daughter’s boyfriend of six years, a truck driver, who allegedly responded, “She (Sylvia) got me upset first. She hit me first.”

“It’s a cycle and we need it to stop,” said Ocasio, 54, a family assistant who has been helping Bronx residents find proper child care, hospitals and legal service for decades. “It’s my biggest fear that my daughter will end up like my sister.”

Despite being desperate, Ocasio chose not to speak up for many years. Among women in the Latino community, she said, there is a feeling that “I did something to claim this,” or “I got him angry and that’s why he hit me.” Sadly, her daughter also inherited this feeling. Every time Ocasio asked Sylvia to file the case in family court, the daughter would say “yeah mom, yeah mom,” but never took action.

Sylvia refused to be interviewed for this story.

Three months ago, Sylvia gave birth to a baby girl, and Ocasio was more determined than ever to speak up: “We need to teach our girls (that) it’s not okay to get hit. We need to stop this cycle,” she said.

She quickly took action, participating in the New York City’s annual anti-domestic violence march last month along with 250 other women who shared her fear that the tragedy would repeat itself for their daughter and granddaughters.

Anti-domestic violence advocates created the annual march in 2001 following a deadly shooting in 1999 that a New Jersey woman was gunned down by an ex-boyfriend on her wedding day.

During the march, Ocasio was surprised to find that girls as young as 11-years old were marching with the crowds, a phenomenon the march’s co-founder, Josie Ashton, called “a tremendous victory” after 11 years of persistence.

The changes are actually more fundamental.

According to Stephanie Arias, a domestic violence officer at the 33rd Precinct in Upper Manhattan, more and more children have recently begun facilitating the reporting of domestic violence.

They play the role of interpreters and also witnesses. “Some of the girls, only 12 or 15, are helping their mom to report the case,” said Arias. “They help them translate, help them identify what happened at home.”

“I see the kids are actually encouraging mom to report the crimes, if the mom doesn’t have enough will power to actually come and report,” she added.

Arias, who came to the precinct in 2008, called it a “new trend,” saying “I have never seen this many kids getting involved.”

Male participation in the anti-domestic violence march is another change.

In the first few years, when the crowd passed residential buildings and stores, people – both men and women – would stick their heads out windows and yell “ridiculous things,” said Grace Perez, the march’s co-founder and coordinator.

“Things like we’re men haters, (we are) bashing men,” she said, while walking in the front of the crowd. “They were trying to justify the violence.”

But now, men seem to have received the message that domestic violence is an anti-social behavior and women are coming forward to speak up for themselves. Wearing all black, dozens of men, wearing all black, joined the march, including the City Councilman Ydanis Rodriguez.

“I am calling on boys and men to treat your girlfriends and wives with respect you would have from them,” Rodriguez wrote on Twitter. “Physically AND Psychologically.”

Statistically, the 33rd Precinct in Washington Heights has received about 2,400 reports this year alone involving incidents of possible domestic violence, an increase from the 1,500 reports filed three or four years ago, according to Arias. However, the number doesn’t tell everything, Arias said, because many women who refrained from speaking up in the past have now come forward and filed a report, making the overall number appear higher than previous years.

“I personally think that (more reports to the police) is a good thing,” said Perez, the coordinator of the march. “By calling the police, women who are victims are taking action, and taking it as a legal matter, no longer a private matter between husband and wife that’s it had been known to be for a long time.”