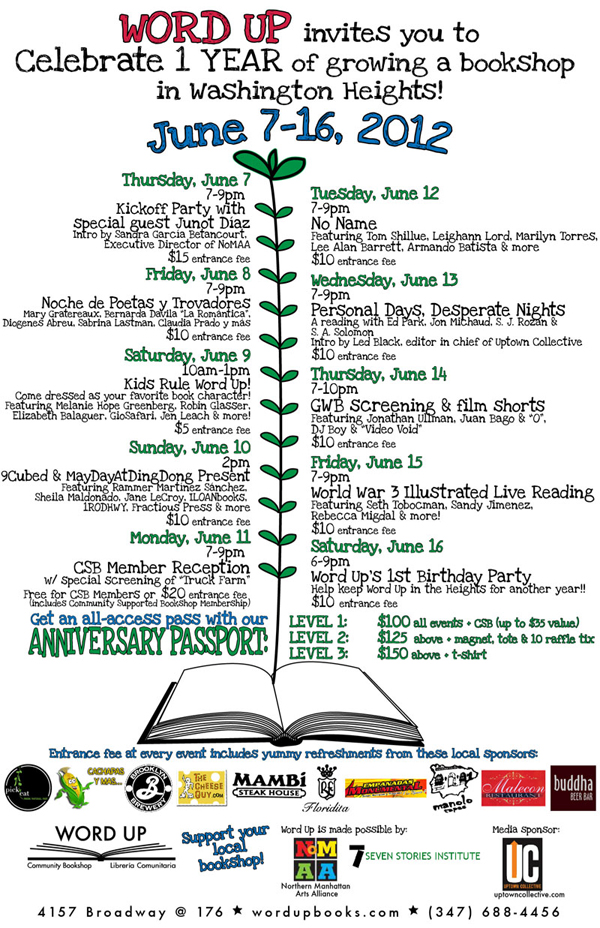 I remember having a meeting in a sweltering day in late May of last year with Veronica Liu and others about making Word Up Books a reality. This was before the shop actually opened, before it even had a name and we were all there huddled, sweating our respective behinds off in Veronica’s apartment. To be honest, at that point I did not know how Veronica would pull it all off.

Now here we are, a year later and Word Up Books has become a focal point in this community. People come to buy books, to hang out, to talk, to conspire and to grow. I can no longer imagine this neighborhood without it. It has become that indispensable. We need it and it needs us. So please help out anyway you can with this Word Up Books Fund Drive. Happy B-Day Word Up Books!

Join Junot Díaz and the Word Up collective to celebrate 1 year of growing a bookshop in Washington Heights! June 7 is the Kickoff Party for our Birthday Fund Drive (June 7-16), which we are launching to ensure that we can stick around for Year 2! With an introduction to the evening by Sandra Garcia-Betancourt, executive director of Northern Manhattan Arts Alliance.

FREE for CSB members; $20 for everyone else (includes a CSB membership)

Current members of our Community-Supported Bookshop program are invited to the shop for wine and cheese and a screening of Ian Cheney‘s Truck Farm (48 min). Join the CSB today to attend! Viewers are trucked across New York to see the city’s funkiest urban farms, and to find out if America’s largest city can learn to feed itself. Blending serious exposition with serious silliness, Truck Farm entreats viewers to ponder the future of urban farming, and to consider whether sustainability needs a dose of whimsy to be truly sustainable. truckfarm.org

NO NAME CELEBRATES WORD UP

A No Name night in honor of the bookshop’s 1st anniversary. Featuring Tom Shillue, Leighann Lord, Marilyn Torres, Lee Alan Barrett, and Armando Batista. Other special guests to be announced via the No Name & Word Up FaceBook pages and websites. NoNameNYC.com

A reading with Ed Park, author of the multi-award-winning novel Personal Days and the founding editor of the Believer; Jon Michaud, author of When Tito Loved Clara (set in Inwood and named as Barnes & Noble Review’s Year’s Best Reading 2011); S. J. Rozan, editor of Bronx Noir; and S. A. Solomon, contributor to New Jersey Noir.

Jonathan Ullman’s debut film GWB opens under the great expanse of the George Washington Bridge. Young Javy and his friend Robbie have no idea what lies ahead when they bury a trash bag stuffed with drug money under the bridge. Set in motion is the story of two brothers—Javy and his older brother Diego—and the thugs who want their money back. A mild-mannered prep cook, older brother, and de facto parent, Diego must protect his small but growing family from a merciless drug kingpin seeking revenge, and soon he turns to an old neighborhood friend with shady connections to help him out of this perilous mess. The events of the night ultimately lead him to the decision that will change more lives than just his own.

Director Ullman will be present at this public screening of GWB, which debuted last August at the New York International Latino Film Festival, and which the Uptown Collective called a “riveting dramatic thriller that grabs you by the collar right from the opening scene and doesn’t let you go until the final credits roll.” gwbthemovie.com

The night’s opening shorts are also crucial uptown viewing, with a screening of Emmanuel “Dj Boy” Abreu’s Summer in the Heights, which went viral in the summer of 2011 after it was picked up on the Village Voice blog (artbydjboy.com); Video Void, the 1980s videomakers who now haunt corners of the Heights with video installations; and a selection of videos by none other than Juan Bago & “O,” whose video Pan Con Queso was an internet senstation in early 2011 and had kids all over the Heights—and world—proudly waving the DR flag (vimeo.com/juanbago). And: Juan Bago and “O”’s new video Ay Cono features Word Up!

World War 3 Illustrated hosts a night of art and politics, featuring Seth Tobocman, Rebecca Migdal, Sandy Jimenez, Isabella Bannerman, Ethan Heitner, and Hilary Allison, with special musical guests Andy Laties and Eric Blitz. Multimedia presentations of WW3’s latest comic book work will be projected live with music. World War 3 Illustrated is an American comics anthology magazine founded in 1980 by New York comic book artists Peter Kuper and Seth Tobocman, and subsequently produced by a collective with a rotating editorship. WW3 Illustrated isn’t about an actual war that may happen; it is about all the ongoing wars our so-called leaders have been waging all our lives around the world and on our very own doorsteps. WW3 also illuminates the war we wage on each other and sometimes the conflicts taking place in our own brains. worldwar3illustrated.org

For a pop-up shop, a 1-year anniversary was unexpected! But due to neighborhood response and the great need for a bookstore and community space, Word Up is still around. Celebrate this milestone with food, music, and your friends and neighbors. Keep Word Up going strong in Year 2!

Pics From The Dominican Book Fair 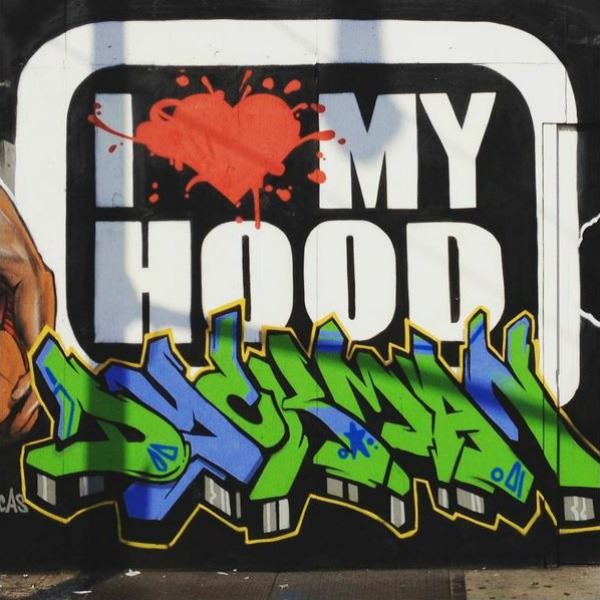