Making heads turn at the salon, while giving back | The Manhattan Times 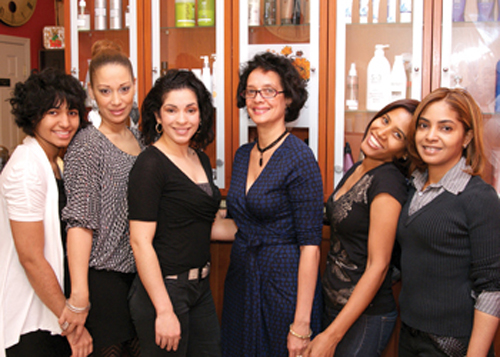 Beauty is a beast.

Hair is a notoriously fickle, and important, part of one’s appearance. And given the preponderance of beauty salons and barbershops throughout northern Manhattan and the Bronx, the upkeep of hair is particularly important to the many men and women who are quick to schedule a shape-up, or a blow-dry.

“At least it is where I’m from,” agrees Elia Josefina DeLeon, who goes by “Josephine”. “Dominican women [simply] like looking and feeling good.”

DeLeon is the owner of Elia’s Hair Salon, located on Amsterdam Avenue, and on 101st Street, which was named in September 2006 as the top Dominican salon in the United States by LATINA Magazine. It is frequented by scores of women from throughout Washington Heights and the Bronx.

But in the 1960’s, such distinctions and titles were a far cry from her modest beginnings in her family kitchen, where DeLeon spent her time styling her mother’s and sister’s hair.

DeLeon, who arrived from the Dominican Republic at the age of 6, always had a fire burning, as she described it. No matter what she was doing, her mind was always on cosmetology.

Read more: Making heads turn at the salon, while giving back | The Manhattan Times.