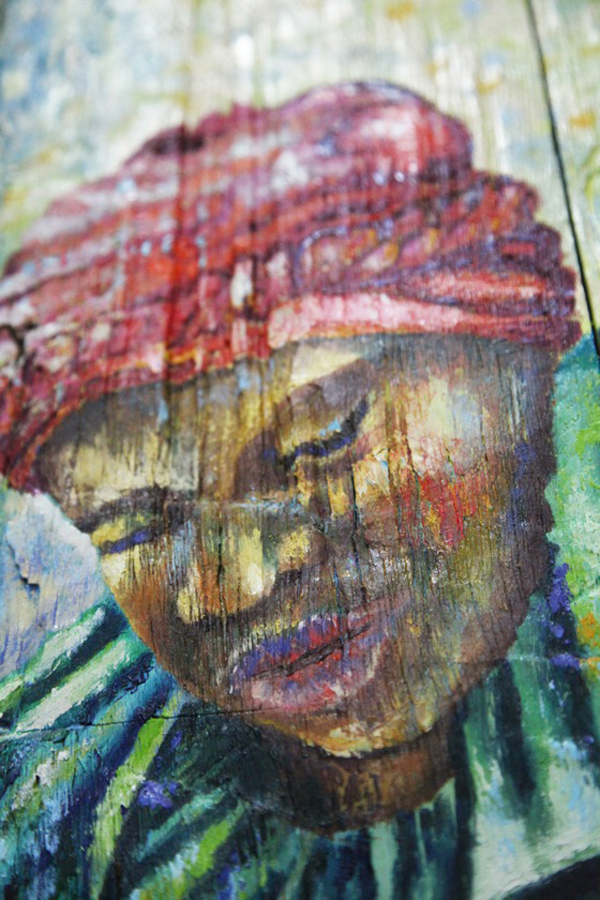 I could feel the swaying of her nightgown shadowing in behind me and with each step of her gliding feet, I pushed the clothes further down the barrel of the washing machine. I inched my way past her trying hard not to knock over the cafetera on the stove and half-avoiding the sharp seams of the plastic covering the kitchen table. I almost caught a win when she stopped me with her glare, “Y que te pasa a ti?” “A mi? Nada, Mamá,” I blurted out with a smile so wide I was certain I looked like a cheap ass clown. I knew she could tell I was lying. I felt her gaze follow me into the narrow gap between the kitchen and the bathroom. I sat on the toilet seat and traced the cracked drywall on the ceiling. In a two-bedroom apartment loaded with more people than could fit in the White House, I was pressing my luck if I stood there for more than two minutes. But all I could do was trace and count – trace and count – the cracks from the ceiling to the heating pipe. My little cousin came back for the second time, “C’mon Marina, he pleaded, I have to pee. That’s not fair. Get out!” “Give me two minutes”, I yelled as I managed to pull my legs into the shower.⁣⁣⁣
⁣⁣⁣
I ran the hot water down my back and scrubbed every skin cell until the Ivory bar faded into the sponge and my fingers went numb. I continued gnawing at my insides because he was still with me. I smelled the bitterness of the Presidente on his breath. I saw his hands on my waist pushing me into his hips. I felt his fingers trickling one by one up my thighs. I felt my heart drumming against my chest. I saw myself escaping from his repulsive grasp and reaching for the door. I could still hear the click-clank of the fifty locks dead-bolted to the door. And for the first time that day, I cried. I remembered my cousin outside the bathroom who must have been hopping from one foot to the other, with his arms flailing like a wild monkey, and wiped my tears. I left my desolation hidden on the droplets hanging from the bathroom mirror and emerged with the steam escaping through the door.⁣⁣⁣

In the kitchen, as I pulled my clothes out the machine and hung them on the cordel, I could feel Mamá was shifting her stare between the garlic in the pilón and my hands. I was nervously trying to seem normal; not do any estupideces that would give me away. “Yo no sé que te pasa a ti, she started, tú no paga renta ni ningún bill. Ojalá yo tene la vida tuya.” I imagined rolling my eyes and continued to hang my clothes in silence. “Qué? Tu tiene un novio?” she pressed. I met her with more silence on my end. “Igualita a tu mama,” the words spilled slowly out of her mouth.

I thought about my mother who left before I could meet her. The same one who would send Christmas cards, with her fancy boyfriend and other kid splattered on the front, but never looked back. “Don Antonio touched me today,” I blurted out without stutters or tears. I looked down at the pilón rocking back and forth before Mamá caught it with one hand. I could see that her knuckles were blush red but I couldn’t bring myself to look at her face. We stood in silence for a while; a weird kind of silence that had me feeling whole again.

Mamá called for my older cousin, Papito, to tell Don Antonio to come upstairs for dinner. He protested a bit; he didn’t want to leave and risk being crushed by King Kooper in his Nintendo game. Besides, I was the one that would bring Don Antonio the lunch and dinner Mamá prepared for him everyday. His wife was back in Santo Domingo y el ni un huevo sabía freír or at least that’s what Mamá would say. She wasn’t the type that was often questioned by others. I turned to walk away. She stopped me, “siéntate ahí y no te me pare.” It was the seat furthest from the entrance to the kitchen. I sat in fear; secretly running away from my racing thoughts.

I smelled Don Antonio’s low-budget cologne before I felt his presence. I focused my gaze on the delicate plates waiting for him at the table. She only used them when folks first came to visit from D.R. I tried shifting to the back of my chair but my legs turned to deadweight — dos sacos de Carolina rice. I remember his shadow hovering over the swirls on the silverware as he took his place at the table. I drowned out his words with the sizzle of the stove and the bobbing of the víveres in the sancocho. Mamá put on her apron and propped the knife drawer on its hinges. She slid the machete, bien afilao, smoothly up his pants until it rested on his neck and tiny blood beads bounced into his shirt. “Por esa yo te mato” she assured him in a soft voice. I don’t remember seeing him again.

A Stroll Through Washington Heights…