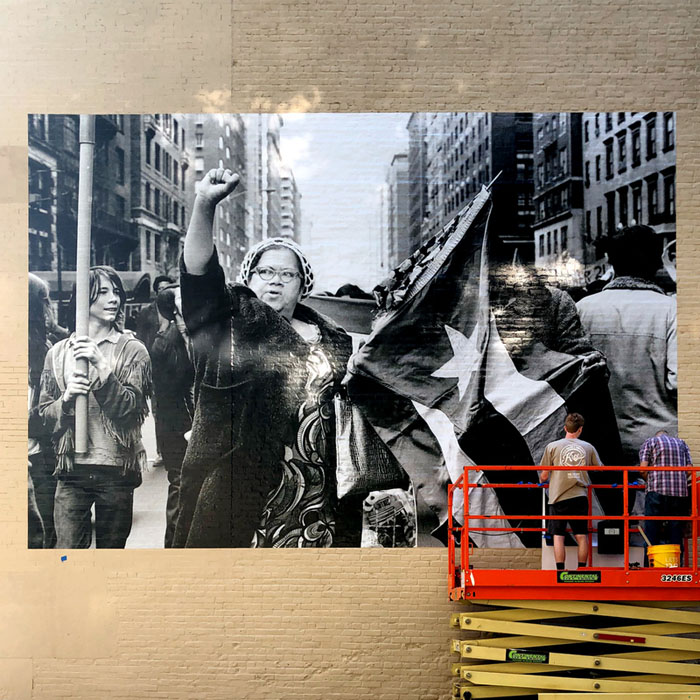 As a proud native from Washington Heights, I can be a little cocky. Anytime I have to commute to the east side or go downtown on the weekends, I overthink it.  It’s a mission to get around the city, especially by public transportation. However, a few weeks ago, I was invited to attend the walking tour of Mapping Resistance: The Young Lords in El Barrio.  I was curious to learn more about El Barrio and the Young Lords. So I decided to Uber to avoid the trains and hassle (not to mention the fact that I was running late—typical Dominican-ish). I kept thinking “l hope the walking tour hasn’t started yet” but I should have known that when you start a walking tour with wine, cheese, crackers, and Latinos in the mix—time is always on our side! Fortunately, I made it in time to have a glass of Rosé and eat some cheese before the tour began.

Our tour guide and mastermind behind the project Miguel Luciano took us back in time; he highlighted several photographs taken by Hiram Maristany, a member of the Young Lords.  The Young Lords was an activist group during the late 1960-1970s, who fought for the liberation of all oppressed people with a focus on issues of health, food, housing, and education.  Many of Maristanys’ photographs stood out to me but one of my favorites was the Garbage Offensive, 1969 located on 3rd Avenue and 111 street.  They say “a picture is worth a thousand words” well this certainly rings true for this image.

With Hiram Maristany in front of “The Garbage Offensive (1969), at the intersection of E. 111th and 3rd Ave, where the event took place 50 years ago. This is the last week to see Mapping Resistance: The Young Lords in El Barrio, before these images come down. • Mapping Resistance: The Young Lords in El Barrio (extended through October 15th) is a public art project about the activist legacy of the Young Lords in East Harlem, featuring the photography of Hiram Maristany (official photographer of the Young Lords and a founding member in NY). • 10 Historic photographs of activist moments in East Harlem are installed at site-specific locations throughout the neighborhood, reactivating their memory in the streets where they occurred 50 years ago. • #MappingResistance #YoungLords #ElBarrio #Harlem #EastHarlem #publicart #Palante • mappingresistance.com

The photograph demonstrates the power of community activism. At the time, the Department of Sanitation would not come Uptown to clean up the garbage. The Young Lords along with residents from the neighborhood borrowed brooms from the Sanitation Department and swept the garbage on to the middle of the street creating a roadblock.

To top it all off and prevent motorists from removing the garbage, they set the garbage on fire forcing the police and fire department to intervene. Their mission was successful because the press documented the aftermath and they held city officials and agencies accountable for their lack of involvement.

The walking tour of Mapping Resistance: The Young Lords in El Bario reminded me that we have so much to learn about our history and the impact communities of color have had Uptown. The stories of the Young Lords inspire us to continue to fight for our rights and our community.

Shoutout to Miguel for putting together this dope exhibit! The exhibition has been extended until Oct.15, 2019. Miguel is hosting another walking tour this Saturday, Oct. 12 from 2:00-3:30 PM register today as space is limited. I promise you it is well worth the trip and don’t forget to tell him who sent you!

FInal weekend to see Mapping Resistance: The Young Lords in El Barrio (extended through Oct 15th). • Take a self-guided tour, or join us for a final Walking Tour this Saturday, October 12th at 2pm (*tours are free, but spaces are limited – link in bio to register). • Mapping Resistance: The Young Lords in El Barrio is a public art project exploring the activist history of the Young Lords in East Harlem through the photography of Hiram Maristany- an original member of the Young Lords in NY and their official photographer. 10 Historic photographs of activist moments were enlarged at site-specific locations throughout the neighborhood, reactivating their memory in the streets where this history occurred 50 years ago. • Image: Young Lords member with Pa’lante newspaper, Hiram Maristany, 1970. • Mappingresistance.com • #MappingResistance #YoungLords #ElBarrio #Harlem #EastHarlem #HiramMaristany #Palante #Publicart

This project has had a timing and purpose of its own. Like this day in summer, when we met Korey Wise of the Exonerated 5, while talking with students from Park East H.S. about the funeral march and protest of the death of Young Lords member Julio Roldán, and the failures of the criminal justice system. • I was working with East Harlem students in @studiomuseum ‘s School Partnership Programs. They all knew who Korey was, as they’d recently watched Ava DuVernay’s @ava “When They See Us”, which has helped engage a whole new generation in understanding the plights of those unjustly incarcerated, and the endless struggle for criminal justice reform. Korey Wise has become a leading activist in this struggle today. • In the fall of 1970, Young Lords member Julio Roldán was unjustly arrested and later found hanged in his cell. In protest of his death while in the custody of the NYC Department of Corrections, and amidst growing unrest regarding the treatment of the NY prison population, community members marched in solidarity with the Young Lords who carried the coffin of Julio Roldán from the funeral home on Madison Avenue, to the Spanish Methodist Church on 111th St. and Lexington Ave, in what became known as the second take over of the People’s Church. • More than 2,000 community members attended his funeral and the Young Lords continued to occupy the church for several weeks. During that time, they offered free breakfast programs, health services and cultural programming to the community, and successfully pressured the NYC Department of Corrections to issue a series of reforms that would include educational programs and improved health care for those incarcerated. • Mapping Resistance: The Young Lords in El Barrio continues through Oct 15th. Ten historic photographs by Hiram Maristany (official photographer of the Young Lords) are installed at site-specific locations throughout the neighborhood, reactivating their memory in the streets where they occurred 50 years ago. • Background image: The funeral march and protest of the death of Julio Roldán #HiramMaristany , 1970. • Mappingresistance.com • #MappingResistance #YoungLords #ElBarrio #Harlem #EastHarlem #Publicart

Pics From The Word Up Books December Rent Party

CAN YOU HEAR ME NOW?