The Avengers – The Greatest Marvel Movie Ever 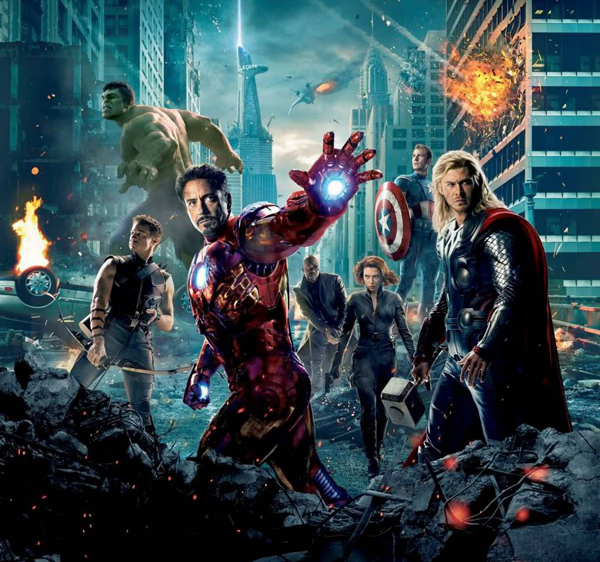 Being a long time Marvel head, I was super stoked when the good folks at Our Tiempo & Being Latino offered me passes to see a screening of The Avengers this past Wednesday at the AMC Loews theater on 34th Street.

But what I saw when I got to the theatre was out of this world. It seemed like there was almost a thousand people trying to get in for the screening. It was surreal. Hundreds of moviegoers clamoring to get in, a few folks actually dressed like their favorite Avenger and the poor theater personnel doing their best to manage the deluge.

At this point, I honestly thought that me getting in was not going to happen. Then my friend Robert Rios of Being Latino showed up and we were given the VIP treatment and led upstairs to the theater.

Then the other shoe dropped, Marvel in their understandable zeal to make sure the movie is not pirated took away everyone’s cell phones. Me? Writer, blogger and all-around tech dude, without my precious, beautiful, white iPhone.

While we waited for the movie to start, I was suffering from serious withdrawal. My fingers were moving as if I still had my reliable smartphone in my hand. All I was thinking about was getting my phone back and what a hassle that would be once the movie finished.

But once I put on the 3D glasses and the movie started, all thoughts about phones, or the outside world for that matter, simply vanished. First of all, I have to say this, do yourself a favor and watch this movie in 3D. It really does make for a better experience.

The 3D in this movie is seriously immersive, unlike many other movies; you actually feel that you are a participant not just a mere spectator. While you already know all the talent in this movie; Robert Downey Jr., Samuel L. Jackson, and Scarlett Johansson among many others, in my humble estimation, the real star of this movie is the director and writer of the movie, Joss Whedon.

Whedon does a remarkable job of creating a story that grips you by the neck right from beginning and doesn’t let you go until the very end. He also, in a very Phil Jackson kind of way, manages to make sure that this outstanding ensemble cast gets their proper shine and time on screen.

I would be remiss if I didn’t mention how much I enjoyed Mark Ruffalo as the mild mannered Bruce Banner. I also felt that Tom Hiddleston did a tremendous job of playing the villain; the arrogant, demi-god douchbag known as Loki. He was sinister yet at the same time surprisingly naïve. All I am going to say is that I thoroughly relished when the Hulk decided to take him on. As usual, Robert Downey Jr. was incredible as the brash and bold Iron Man. Lastly, Scarlett Johannsson was super duper incredible as the beautiful but deadly Black Widow.

This movie exceeded, in fact – shattered, all of my expectations. It is the best Marvel movie ever and is the best movie experience I have had since Avatar. The final, no-holds barred battle between the forces of good and evil will have you on the very edge of your seat.

By the way folks, stay tuned after the credits for a few surprises. I also got my phone back without a problem and everything was right in the universe. Long live the Avengers.